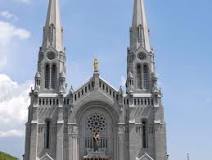 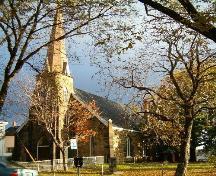 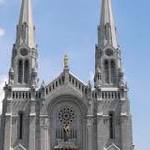 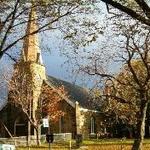 Last week we came home from a trip back east. This isn't going to be a travelogue per se, but rather a reflection on the different aspects of Christianity--and Christians!--along the way.

We boarded our ship in Boston and quickly settled in. It was a beautiful day and the fall colours--if not at their peak--were still beautiful. One of our ports of call was Sydney, N.S. The historic downtown looks a little sad and run down, but we were delighted to find St. George's Anglican Church open. Begun in 1785 (before Vancouver sailed up our Pacific Coast!), it is the oldest building in Sydney and the oldest Anglican Church in Cape Breton. It was only open because of the dedication of a small group of ladies. The diocese, it seems, isn't really interested in this old building, but the ladies fund raise, keep the building open when the cruise ships are in town and act as guides. (sound familiar?) It made me think about the day to day running of churches from one end of this country to another. Where would they be without this dedicated cadre of women?

From Sydney we sailed to Charlottetown. No, I didn't want to join the tourist throngs at Green Gables, but I did want to walk around this delightful little city. One area is blessed--perhaps overly blessed!--with churches. There's a big Catholic Basilica. Across the street is a Methodist church with an elderly lady dead heading the flowers. Further on another red brick edifice was home to the Presbytarians. Round the corner from that we found the Anglicans...after the foray into so many houses of worship, my husband was quite willing to have me browse a yarn shop. I wonder how many of the churches are still filled with worshippers on Sunday morning....

In Quebec City we went on a short excursion out of town to the great basilica of St. Anne de Beaupre. In contrast to the little church in Sydney, this massive building was begun less than a hundred years ago. Impressive it is, but church attendance in Quebec has tanked in the last few decades. Up the hill I noted a spire. "Parish Church?" I asked the guide. "It used to be," he said. "Now it's being converted into condominiums."

From churches, to Christians. One of the reasons we keep returning to Holland America is the fact that they have a priest on board and mass is said daily. One afternoon, there were no volunteers to read. I said I would be glad to read, but I was an Anglican. No matter, said the preist, and I took my place at the lectern. Afterwards, greeting each worshipper as they left, he said to Jerry and I that we were welcome to take communion. We were astonished--and delighted. Inclusion to him was obviously more than a buzz word.

Then, on the train, we met a couple from Tennessee. They'd been everywhere but were afraid to go back to Europe this year because it was too dangerous. "Dangerous," I blurted out. "You live in the US and you think Europe is dangerous?" That prompted a speech on how safe life was when everybody is armed. The husband, we leared, proudly carried a concealed weapon. (Not on Via Rail, thank goodness) The wife then proceeded to tell me about an incident in her church. A man had come in one Sunday morning, waving a weapon and demanding Jewelery and cash. At that point,  she said triumphantly, the pastor reached under the pulpit, pulled out a gun and shot the would-be robber.

Fr. Art Help us to help Lytton Can you help?